We were delighted to attend IBC’s first face-to-face edition since 2019. Read on for our professional opinion! 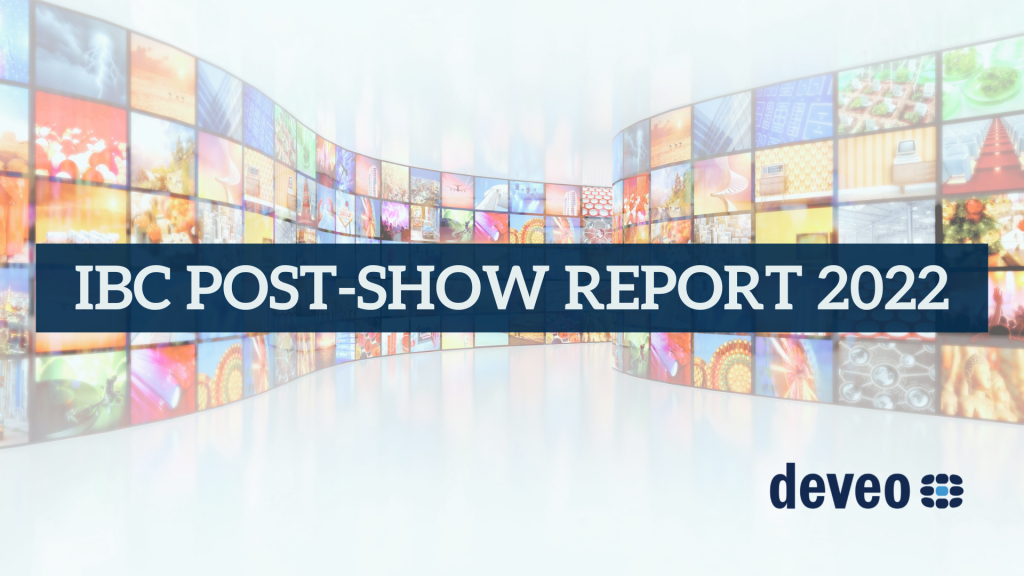 DEVEO was in Amsterdam for IBC22!

IBC was once again thriving this year, and we were very excited to be there. If you couldn’t make it, you may be wondering what you missed. This short IBC post-show report is for you! We’ll run over the official figures, give our professional opinion and highlight the latest trends.

There were 37,071 attendees present this year, coming from 170 countries, and more than 1000 exhibitors.

How does this compare with previous years? Well, let’s take 2019’s figures since it was the last ‘full’ IBC. Three years ago there were 56,390 attendees; this year IBC only had about 65% of the ‘full’ attendance. Previously we saw 1700+ exhibitors, so this was quite a lot less than previous years (only 59% compared to 2019)

How did IBC manage to create this bustling, full atmosphere?

The number of days that the show was spread over was reduced from five days down to four. So this meant that it was from Friday to Monday, instead of the usual Tuesday finish. Spreading the show over a shorter period helped to keep it busy.

The physical space that the show was spread over was smaller than normal too. This definitely helped to create a busy atmosphere! IBC confirmed that demand for next year is already high, and so an additional hall will be back in use for 2023.

So, were people happy?

Based on our clients’ feedback, we think so! We had various reports of floor traffic being better than expected. Some people even went as far as saying that it was better than pre-pandemic!

Our clients had a successful time, in part because we qualified interest & arranged meetings with new decisions makers. The quality of the meetings that we arranged were generally high, so this indicates a good delegation of senior profiles at the conference again.

The weather was also good (not a given for Amsterdam in September!). The sun helped to create a convivial atmosphere, with beer gardens outside the show well attended as each day progressed.

The only reported downside of the show was the airport chaos on Monday as people were leaving. Indeed, some clients experienced last minute cancellations as the rush to get to the airport started. As the situation unfolded, the official advice was to arrive at the airport 4 hours beforehand. This led to some negative impacts on people’s plans.

What were people talking about at this year’s show?

Refining business models was discussed extensively & the subject of keynote speeches. The FAST channel business model (which can best be described as a combination of steaming and traditional viewing), was definitely one of this years talking points.

Digital transformation is still being discussed! Giants such as the merged Warner Bros & Discovery company talked about the technical challenges of aligning platforms around the world from their combined portfolio. The usage & leverage of big data in the media & entertainment is vital to understanding consumer behaviour and also remained a talking point.

Of course, no technological show showcasing tomorrow’s world would be complete without a mention of the Metaverse & all the technologies surrounding it. Notably, blockchain was talked about during a keynote speech as a way to protect identity within the metaverse.

Next steps after a successful IBC?

Obviously once you’ve followed up with new prospects and so on you need to look to the next event. DEVEO offers meeting arrangement services for all the major Telco & Broadcast tradeshows. Additionally, our database of 250K worldwide executive contacts in the Telco & Broadcast industries allows us to run lead generation campaigns year round! Please get in touch if you are interested in our services.

Thanks for reading, and we hope that you’ve enjoyed this brief IBC post-show report!