Did you go to AfricaCom this year? We did! Read on to find out more… 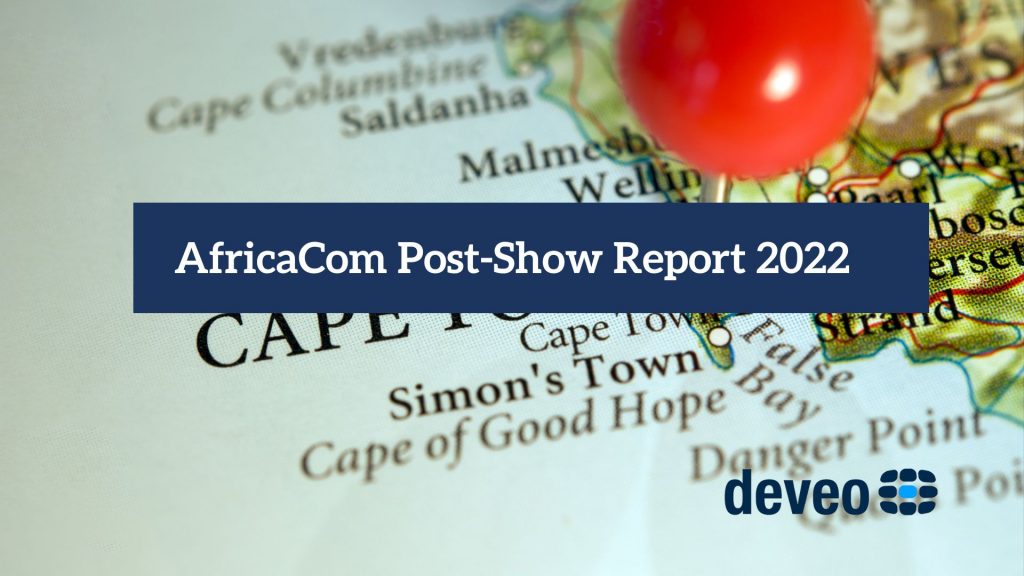 Last week Matthieu attended AfricaCom in Cape Town, South Africa running from 7 – 10 November. He has been going to this show since 2014, and was delighted to be back in South Africa again. This was AfricaCom’s first in-person edition since 2019. The pandemic forced the 2020 & 2021 face-to-face events to be cancelled. Our short AfricaCom post-show report will give you our opinion on the 2022 edition.

On the whole, the show was good rather than exceptional. This year, Informa had combined AfricaCom with AfricaTech and bundled it as the “AfricaTech Festival”. Overwhelmingly, the attendees were still referring to AfricaCom. For us there was no big differences that we could see compared to previous years.

To help give it a more bustling appearance, all of the show was hosted in one Hall. Despite this, they had clearly not managed to sell every slot, and so areas where booths should have been were turned into small ‘chill-out’ areas.

On the final day, the show seemed much busier, but it was clear that this was a day where locals could attend (we even saw a group of teenagers on a class trip, so not exactly the CxO profiles that we might have expected).

We heard from exhibitors a fairly mixed response. Some reckoned that it was successful, others didn’t feel that the quality of attendees matched their expectations. In 2019 we reported that Telcos were in decline at AfricaCom and we saw this trend continuing in 2022.

Compared to previous editions we noticed really far less European and North American companies. The companies forming the bulk of the exhibitors came from Asia & India as well Africa itself. This matches an increasing Asian presence on the continent. Again, we referred to the quantity of Chinese exhibitors in 2019, so this trend has continued too.

Shhh… rumour has it

Privately, we heard that exhibitors had some frustrations with the organisation of the event. It wasn’t as slick or well organised as it could have been. Possibly the structural changes in Informa left them with a more inexperienced staff than they’d have liked?

The official attendance figures were 12,000 attendees from 110 countries, with 25,000 people registered. There were 300+ exhibitors. In 2019 there were 17,000 with 500+ exhibitors, so we can definitely see that the show has really not recovered from COVID yet.

Recently, MWC Africa took place in Kigali, Rwanda. We spoke to people who also attended that show as well, and we’ve come to the conclusion that it has the potential to disrupt AfricaCom’s place in coming years. MWC Africa was very small, but the quality of attendees from Telcos was very, very good. Could it take over AfricaCom’s crown in the future? Let’s see…